Home » 2017: Making Sense of a Weird Year
Previous Next 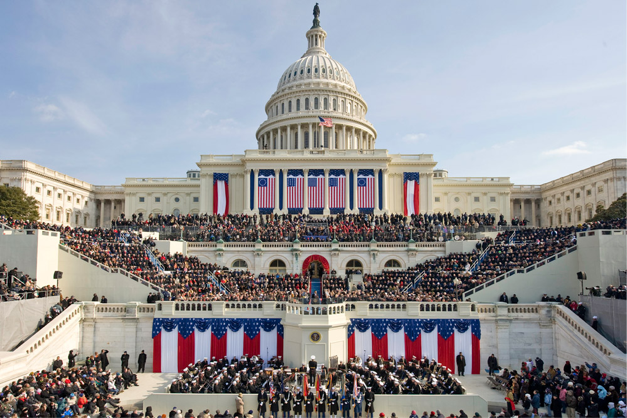 The year began with Donald Trump’s bleak inaugural address, during which, in stark contrast to the usual pomp of the quadrennial celebration, he surveyed the “rusted out” landscape of the country and bemoaned the “American carnage” of our time.  After the new president finished his remarks, former President George W. Bush summarized the speech as only as he could, muttering to no one in particular as he made his way off the dais, “that was some weird s—.”  No matter where you fall on the political spectrum, we can all agree that 2017 was pretty weird. But it may have been more than that.

During his 12-year tenure at the State Department, Acheson led the American delegation at Bretton Woods, which was the birthplace of the World Bank, the International Monetary Fund, and the World Trade Organization.  He was also the lead draughtsman of the Truman Doctrine, Marshall Plan, and NATO. In the first year of Trump’s presidency, he has consistently criticized many of these institutions while systematically dismantling similar international agreements that his predecessors had spent years building.  As soon as he took office, he backed out of the 12-nation Trans-Pacific Partnership (TPP), which Richard Haas, the former president of the Council on Foreign Relations and advisor to Presidents George H.W. and George W. Bush, called “the best tool” we had “to counter Chinese regional influence.”  In June, Trump announced that he would withdraw from the Paris Climate Accord, leaving the United States as the only country in the world to reject the agreement.

In October, he decertified the Iran nuclear deal, against the advice of several of the other signatories, which included Britain, France, Germany, Russia and China. And while Trump earned his fortune perfecting the art of the deal, he has yet to create any viable alternatives to these structures of international order. Nearly 50 years ago, Dean Acheson, a leading architect of the postwar international system and one of the “Wise Men,” the brightest stars in the twentieth century foreign policy firmament, published his memoirs.  Present at the Creation is Acheson’s first-hand account of building the institutions that have scaffolded the international system since World War II and the book still holds up as a blueprint for American leadership in the world.  Five decades from now when historians look back on 2017, will they conclude that this year was simply a weird outlier?  Or that 2017 was the beginning of the end for the very kind of institutions that Acheson and others created to stabilize our democracy and project American power around the globe?

The Trump administration has consistently undermined some of America’s most vital institutions as well.  At the State Department, just 10 of the 44 top political positions have been filled, including an assistant secretary for East Asia, the Near East, or African affairs and key ambassadorships to Saudi Arabia, Turkey, Jordan, Egypt, Qatar, South Africa and South Korea remain vacant.  Budget cuts have pushed many of the department’s senior ranks into early retirement and the number of people taking the foreign service exam is down by 50 percent this year.  At the FBI, Trump fired the director and recently tweeted that the bureau’s “reputation is in Tatters.”

These institutions – a professional diplomatic corps and an independent law enforcement agency – are the old growth forests of our democracy and key levers for exercising American power abroad.  Regular pruning is certainly required to keep bureaucratic overgrowth in check, but these agencies must be responsibly trimmed rather than slashed and burned.  The early departure of more than 300 career foreign service officers over the last year will take decades to replace. Even so, the center has held.  American institutions remain vibrant and relevant. Our diplomats are still engaged in international negotiations, our judiciary remains independent, and the rule of law prevails. Most notably, special counsel Robert Mueller III continues his investigation into Russian meddling in the 2016 presidential election unimpeded.  For now.

In contrast, domestic institutions have proven to be less resilient in other countries as autocratic leaders have consolidated power this year.  Indeed, Robert Mugabe aside, 2017 was the year of the strongman: in China, the communist party revised its constitution to grant Xi Jinping nearly unchecked power and enshrine him alongside Mao as one of the party’s greatest theorists; in Turkey, Recep Erdogan continued to weaken any opposition, pushing through legislation effectively making it illegal for the legislative branch to investigate his executive branch; in the Philippines, Rodrigo Duterte ramped up his war on drugs (and his opponents) with extrajudicial killings.  And in Russia earlier this month, Vladimir Putin confirmed what the world already knew – that he would seek reelection in March, extending his tenure to 24 years, the longest by a Russian leader since Stalin’s 29-year reign.  None of these countries had institutional checks and balances strong enough to prevent the democratic rollback that has occurred.

So, what does it all mean for 2018?  In the United States, these countervailing forces of executive power versus institutions have put us on a collision course and something’s got to give.  During the next year, Trump will continue to undermine international and American institutions, even as one of them, in the form of a special counsel investigation, tightens around the president’s inner circle.  As more indictments come down, the burden will fall largely on Congress, another of our institutions, to respond. Will the checks and balances in our democratic system endure where they have failed in other countries? Congress’s response to a potential constitutional crisis will answer this question and in doing so, determine whether 2017 was simply a year of “weird s—-,” or if it was a coda to Acheson’s memoirs. Will 2018 be the year that we are again present at the beginning of a new American era, as President Trump has promised?  Or this time, are we present at the destruction?