Activism in the C-Suite

Home » Activism in the C-Suite
Previous Next

Activism in the C-Suite 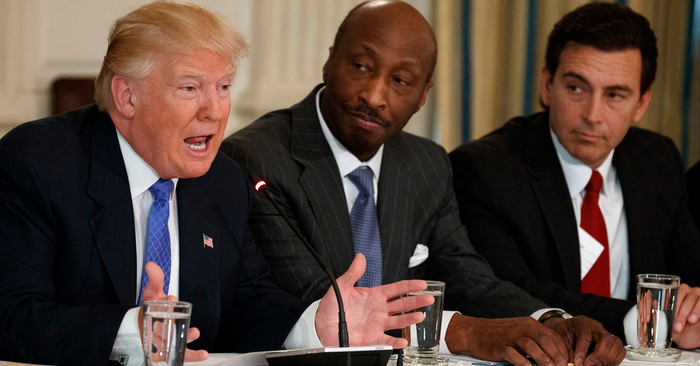 Over the past ten months, a new breed of activist has emerged: Chief Executive Officers. Traditionally, CEOs have avoided public involvement in any issue that is remotely controversial; however, CEOs have recently become some of the country’s most visible activists on issues such as racial equality and immigrant rights. The ground shifted rather quickly after President Trump’s inauguration. Almost immediately, Trump’s unconventional approach to politics altered the political climate and precipitated a level of civic engagement that has not been seen in decades. Angry employees have called on their leaders to speak out against certain policies, while unhappy consumers have turned into hashtag activists, leveraging social media campaigns against companies they see as having a responsibility to challenge the president’s most controversial policies.  As a result, many executives have been forced to weigh the risk of political engagement against the potential blowback from customers and employees who oppose the administration’s policies.

The first test for many CEOs came on January 27, 2017, when President Trump signed an executive order banning individuals from seven predominately Muslim countries from entering the United States, prompting outcry from private citizens, business owners, and large corporations throughout the country. The order, which was ultimately blocked by federal courts, infuriated social media activists who were already critical of the CEOs who agreed to serve on Trump’s advisory councils. Indeed, just five days after the immigration order was signed, former Uber CEO Travis Kalanick resigned from the economic advisory council amid intense pressure from customers who appropriated the #deleteuber campaign to demand that the company sever ties with the Trump administration.

Kalanick may have been the first executive to succumb to stakeholder pressure, but he certainly was not the last. High-profile resignations from the advisory council intensified in the following months, and on June 1, Tesla CEO Elon Musk and Disney CEO Bob Iger also stepped down after the president announced his decision to withdraw from the Paris Climate Accord. Weeks later, the CEOs of Merck, Under Armour, and Intel Corp resigned from the council following the president’s controversial remarks about the far-right rally in Charlottesville, VA that left one woman dead at the hands of a white supremacist. Immediately following the president’s remarks (which initially blamed individuals “on both sides” for the violence) Twitter erupted, and outraged activists once again urged prominent businesses to distance themselves from the administration.

Kenneth Frazier, CEO of Merck & Co pharmaceuticals and the grandson of a former slave, was among the first to do so when he admonished the president, stating, “Our country’s strength stems from its diversity. America’s leaders must honor our fundamental values by clearly rejecting expressions of hatred, bigotry and group supremacy, which run counter to the American ideal that all people are created equal. As CEO of Merck and as a matter of personal conscience, I feel a responsibility to take a stand against intolerance and extremism.” [1] Soon after Frazier resigned, the CEOs of Under Armour and Intel Corp followed suit.

In response to the rapid-fire resignations, President Trump dissolved the business advisory councils and lashed out at the executives who had abandoned him on Twitter. Nevertheless, some of the country’s most powerful corporate leaders have continued to criticize some of Trump’s policies and legislation. Indeed, hundreds of tech leaders co-signed a letter earlier this month condemning President Trump’s decision to end the Deferred Action for Childhood Arrivals (DACA) program, which permits approximately 800,000 illegal immigrants who were brought to the United States as children to live and work in the country. The letter, which was released by the tech industry’s immigration lobbying group, FWD.us, claimed that ending DACA would cause the United States to “lose $460.3 billion from the national GDP and $24.6 billion in Social Security and Medicare tax contributions” and called on Congress to pass legislation guaranteeing DACA “Dreamers” a path to permanent legal status in the United States. [2]

Although corporate leaders have opposed controversial policies in the past (see: Salesforce challenging laws in Indiana and North Carolina that undermined LGBTQ protections), they have traditionally leveraged their political activism to challenge regulatory laws, not sitting presidents. The corporate response to immigration policies, DACA, and the Charlottesville attacks was thus unprecedented and a clear example of how the business world has altered its playbook in response to the Trump administration’s unconventional approach to politics. The surge in civic engagement has forced CEOs to choose between remaining above the political fray or engaging on issues that are important to their customers and employees. In some cases, it is clear that CEOs are acting on personal conviction as well. If recent events are any indication, CEOs are more willing than ever to speak out in times of intense social upheaval. In short, they have found their voice, and it doesn’t look like they will be quieting down anytime soon.