Assassinations in the Drone Age

Home » Assassinations in the Drone Age
Previous Next

Assassinations in the Drone Age 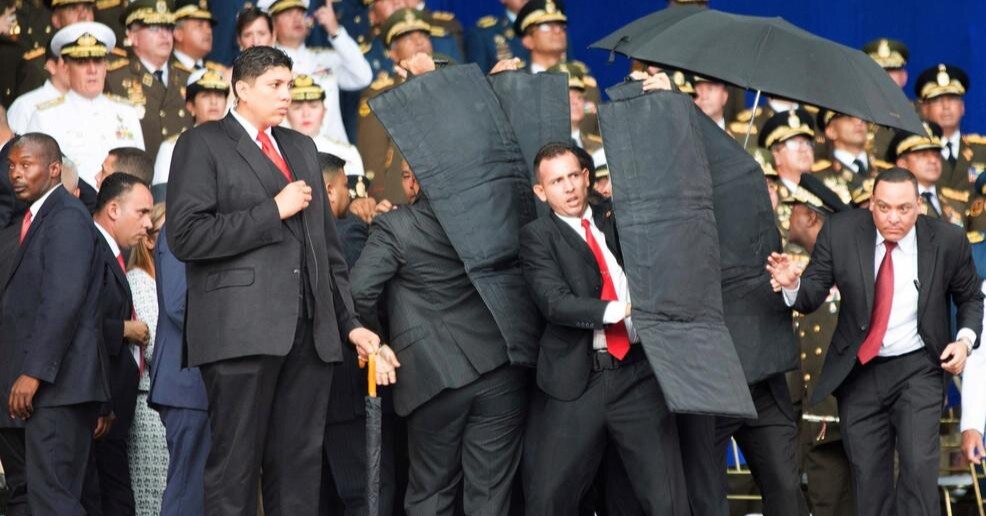 On Saturday evening, embattled Venezuelan President Nicolas Maduro was nearing the end of his remarks to hundreds of military troops at a ceremony commemorating the 81st anniversary of the National Guard at an outdoor event in Caracas. In the middle of his latest pledge to turn around the country’s shattered economy, an explosion rang out, cutting Maduro off mid-sentence. The president, flanked by the first lady and a cadre of his most loyal advisors, looked up in confusion as his security detail awkwardly surrounded him with black ballistic shields. A drone carrying about two pounds of plastic explosives had detonated overhead, one of two allegedly targeting Maduro and his top brass. While Maduro emerged unscathed, the incident marks the first known drone assassination attempt against a head of state.

Like the president himself, Maduro’s security detail appeared unsure how to react to the drone. They quickly encircled him with protective shields but did not immediately extract him from the venue. Also, the security team ignored the first lady, Cilia Flores, who stumbled as she grabbed hold of the arm of the Supreme Court judge at her side (who was also left to fend for himself). Meanwhile, much of the audience, which consisted of Maduro loyalists and the troops who have spent the last year on the front lines of the crackdown against opposition protesters, scattered in a panic.

At a press conference the next day, Venezuelan Interior Minister Nestor Reverol told reporters that one of the drones was meant to explode above Maduro and the other was to detonate directly in front of him as he addressed the crowd. Reverol claimed that the military electronically diverted one drone from its course and the other crashed into an apartment building two blocks away. According to Reverol, the drones were a model known as DJI M600, which can lift relatively heavy loads.

The U.S. military has increasingly relied on armed drone strikes against enemy combatants over the last decade in Afghanistan, Iraq, Yemen, and elsewhere, raising concerns of the inevitable proliferation of this technology into the hands of terrorists and criminals. Not surprisingly, the Islamic State has long sought to use drones against the United States – last year, ISIS drones reportedly attacked U.S. Special Operations forces in Syria.

The U.S. Secret Service and security details for other heads of state have been on alert for drone attacks for the past several years. The risk was highlighted in January 2015, when a drone crashed on the White House lawn after its operator lost control of the device. Last month, Reuters reported that Saudi Arabian security forces shot down a recreational drone near a royal palace, briefly prompting speculation of a coup attempt. The appeal to bad actors, from terrorist, criminal, or activist groups to lone wolves, is obvious: drones are available to anyone online for less than $1,000; they are relatively easy to fly; and can be operated remotely from more than a mile away.

While the threat of drone attacks has long been on the radar, security professionals have yet to develop a consistently effective deterrent. Drone operators can disable geofencing, jamming radio frequencies can cause widespread disruption of mobile communications, and shooting down a drone can result in obvious collateral damage. In a congressional hearing in June, senior officials from the Department of Homeland Security testified that drones present “a very serious, looming threat that we are currently unprepared to confront.”

In Venezuela, the impact of the unsuccessful attack was negligible. As soon as the smoke cleared, the country returned to its previous programming of slow-motion collapse. President Maduro quickly took to the airwaves to denounce the assassination attempt, which he pinned on right-wing opponents, the outgoing president of Colombia, and the United States. And by Monday, he was using it as a pretext for the latest crackdown on the opposition. But the drone attack will reverberate far beyond the calamitous streets of Caracas. It was the first drone assassination attempt against a head of state, but it certainly won’t be the last.