Home » The Assassination of Shinzo Abe: Risks and Takeaways for High Net Worth Security
Previous Next

In the wake of Prime Minister Shinzo Abe’s assassination last week, many security professionals are left asking several key questions – how could this happen, what can we learn from this tragedy, and how can we ensure our own clients remain protected? If this event can happen in a country such as Japan, with some of the world’s strictest gun regulations and where political assassinations are rare, it can occur anywhere. It serves as a warning that high net worth individuals and their security details must be knowledgeable about their threat environment and ready to react in any situation.

According to open source reporting, Prime Minister Abe was giving a campaign speech to a crowd of people outside the 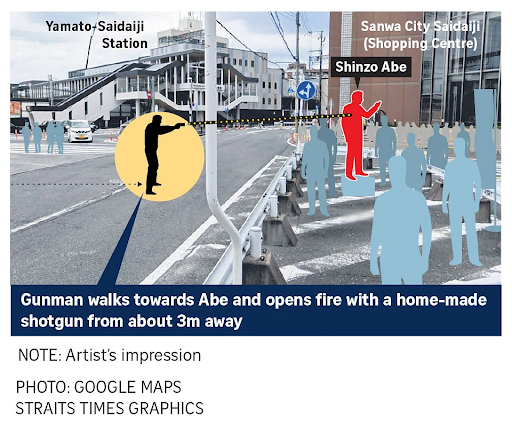 Yamato Saidaiji train station in Nara, Japan when 41-year old Tetsuya Yamagami approached from behind and fired two shots at Mr. Abe with a homemade gun.

Concentric’s Chief Security Officer, Jim Morgan, a 24 year veteran agent of the United States Secret Service, had the pleasure of protecting and working with Prime Minister Abe during his time as a Secret Service agent. Concentric’s Global Intelligence analysts worked with Mr. Morgan to identify and analyze available open-source media to determine what went wrong and what we can learn from the tragic assassination of Mr. Abe.

“In security, nothing is 100 percent,” Mr. Morgan notes, “you can do all of the things you’re supposed to do and something could still happen. So you try to make it as hard a target as possible for the assailant so they move on from your principal.”

To learn how Concentric can help support your security details with executive protection agents, training, or intelligence, please visit our website, and reach out to let us know how we can help keep you safe and secure.

Based on Concentric’s Global Intelligence team’s findings, Prime Minister Abe’s assassin, Tetsuya Yamagami, is a 41-year old former member of Japan’s Maritime Self-Defense Force. Though he was unemployed at the time of the assassination, Mr. Yamagami was previously hired through a dispatch agency in October 2020 to work at the freight department of a factory in Kyoto prefecture. Colleagues characterized Mr. Yamagami as someone who kept to himself and did not discuss his private life. He would often eat lunch alone in his car.

After six-months of work, he started to exhibit gradual neglect of work practices. In March 2022, Mr. Yamagami began taking unauthorized time off and spoke of heart issues and other physical problems, despite having no previous issues with attendance. His employment ended on May 15.

We found no information to suggest Mr. Yamagami held any specific connections to Prime Minister Abe. Mr. Yamagami told investigators he initially planned to target the head of the Unification Church due to his mother’s financial troubles, which he attributed to the church. He said he also intended to kill Prime Minister Abe due to his belief that Mr. Abe’s grandfather contributed to the church’s expansion in Japan.

Mr. Yamagami circumvented Japan’s gun restrictions by making his own zip gun. Zip guns are most frequently seen in areas where firearms are extremely difficult to acquire, such as in prisons or countries with strict gun regulations such as Japan. Mr. Yamagami told police he watched YouTube videos to learn to make the weapon, and practiced shooting in the mountains days before the assassination. A search of his home revealed additional handmade guns and explosives.

The Evolving Security Paradigm for Influencers and Gamers