Venezuela and the Pitfalls of a Petrostate

Home » Venezuela and the Pitfalls of a Petrostate
Previous Next

Venezuela and the Pitfalls of a Petrostate 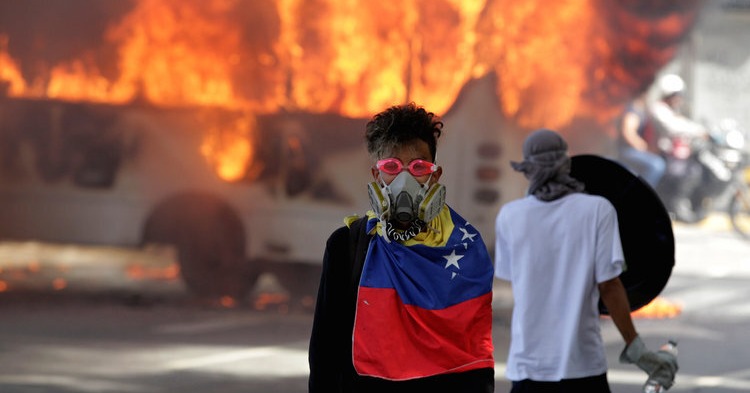 The recent political crisis in Venezuela has flooded the news with images of violent protests, humanitarian disasters, and military convoys blocking aid to refugees. The story of Venezuela is tragic: once considered the strongest economy and democracy in Latin America, the country is now on the verge of becoming a failed state. This civil unrest arises from systemic corruption, gross mismanagement of state institutions, and political infighting. Yet media have largely ignored one of the key issues driving the current crisis: the fundamental role that oil has historically played in shaping Venezuela.

Venezuela is the archetype of a failed petrostate. Oil has been the lifeblood of Venezuela’s economy since 1922, representing 90% of all exports and providing the majority of government revenue. This dependence on oil also shapes Venezuela’s political character. Enormous oil rents have historically incentivized the concentration of Venezuela’s wealth into state-owned industries that were controlled by elites. In conservative estimates, over $200 billion dollars of state oil money has been embezzled.

For decades, Venezuela’s government and citizens lived within the boom-and-bust cycle of oil revenues driven by fluctuating market prices. When oil was high, there was frenzied spending. Venezuelan political leaders enriched themselves and leveraged petrodollars to create massive subsidies and social welfare programs that ensured popular support. When crude oil prices fell, as was the case in the 1980s, the Venezuelan economy plunged into crisis, creating widespread political instability.

In 1998 Hugo Chavez was elected on a socialist platform promising to distribute Venezuela’s vast oil resources. Armed with populist appeal and petrodollars, Chavez dismantled Venezuela’s state institutions, doubled the national debt, and distorted the economy through subsidies.This system worked as long as oil revenues remained high. However, in mid-2014, oil prices plunged, and the economy was sent into free-fall. Dwindling oil rents could no longer generate enough revenue. Unemployment increased and protests flared. Inflation skyrocketed, and by August 2018, the government was forced to eliminate longstanding fuel subsidies, worsening the economic conditions of the poor. Unable to provide basic care and social services, the country with the largest proven oil reserves on earth has become a humanitarian disaster.

Venezuela should serve as a cautionary tale to other petrostates that have been mired in a sustained global oil recession since 2014. Crude oil is one of the most volatile traded commodities. WTI crude is trading around $51 per barrel, which is significantly lower than the break-even point most states require to fund their government and social programs. Of all the OPEC nations, only Kuwait and Qatar (which left the OPEC cartel in January 2019) can cover their budgets with oil prices below $60 per barrel. States such as Libya, Bahrain, and Algeria need oil prices over $100 per barrel to stay solvent. Even Saudi Arabia, which has embarked on dramatic fiscal overhauls, needs to sell oil at estimated prices of $73 a barrel.

Countries often described as petrostates include Russia, the United Arab Emirates, Indonesia, Qatar, Mexico, Kuwait, Iran, Cameroon, Saudi Arabia, Chad, Bahrain, Nigeria, Libya, Oman, Venezuela, and Ecuador. Oil wealth shapes these petrostates, gifting their governments with lavish resources to provide social services to their citizens. For many of these states, the redistribution of oil wealth is the basis of their authority and legitimacy. This was evident in the wake of the Arab Uprisings in 2012, when a number of Gulf states used oil windfalls to offer social welfare programs and suppress public protests.

Petrostates and their citizens often become addicted to oil revenue during boom cycles, only to face humanitarian, security, and geopolitical challenges during oil recessions. Without oil revenue, states cannot provide effective governance or essential services. This can have huge security implications for countries like Nigeria and Chad, which rely on oil revenue to wage counterterrorism campaigns. Arab Gulf countries rely on oil wealth to employ their national citizens. Other countries provide welfare and subsidies from oil money to alleviate poverty. Still other states use oil wealth to maintain control of restive populations.

Historically, when governments need to cut expenses, the population pays the price. The recent elimination of fuel and food subsidies in Egypt, Jordan, and Venezuela created humanitarian crises and popular dissatisfaction. When OPEC countries began imposing austerity measures in 2015, there was a marked increase in political opposition. Dependency on oil revenue is a significant vulnerability. Historically, when oil prices are low, oil-dependent countries experience greater instability.  Oil insecurity will continue to be an enormous geopolitical challenge in the future. While the risk of sustained low oil prices doesn’t necessarily indicate impending governmental collapse, it does increase the potential for unrest and insecurity. The geopolitical consequences include humanitarian and refugee crises, political unrest, violence, or a breakdown in security that creates safe-havens for criminal enterprises or terrorist organizations.

The world is in an era of cheap oil. Since 2014, most petrostates have been operating at a loss, eating into their national reserves to sustain key state programs. This situation doesn’t appear to be easing. Pressures from greener and more sustainable energy sources, American and Canadian shale oil, distrust within the OPEC cartel, and technology efficiencies could ensure that oil prices remain low in the future.

OPEC states are aware of this gloomy forecast, and many have begun reducing their dependence on oil. These measures have included economic and fiscal reforms, such as cutting government expenditures, slashing subsidies, introducing taxation, and raising non-oil revenues. Over time, these measures may fall short as citizens demand greater social and political concessions.

The crisis in Venezuela represents a worst-case scenario. Venezuela’s political struggle between disgraced President Nicolas Maduro and his challenger Juan Guaido has devolved into a larger geopolitical competition between the United States, Russia, and China over whether and how the international community should intervene. As Venezuela faces growing isolation, an estimated three million refugees face deprivation and starvation. It is not clear how or when this conflict ends, or whether Venezuela’s future leadership will be able to take proactive steps to prevent history from repeating itself.

Venezuela also serves as a wakeup call for security professionals. Petrostates are located in many of the world’s worst geopolitical hotspots in the Middle East, Africa, and Latin America. These states face a higher risk for political instability, and could easily fall victim to regime collapse, wide-spread violence, or regional humanitarian disasters the next time oil prices fall.