Who is Sam Hyde? Identifying Disinformation and Conspiracy During a Crisis Situation

Home » Who is Sam Hyde? Identifying Disinformation and Conspiracy During a Crisis Situation
Previous Next

Who is Sam Hyde? Identifying Disinformation and Conspiracy During a Crisis Situation 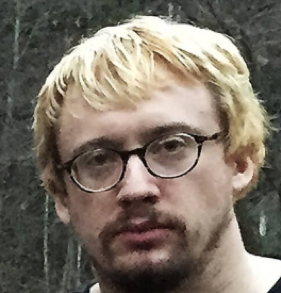 Does this man look familiar?  If you follow the news, there is a good chance you’ve seen him before.

Maybe it was his photo that popped up on your feed as you watched the Santa Fe High School shooting unfold: 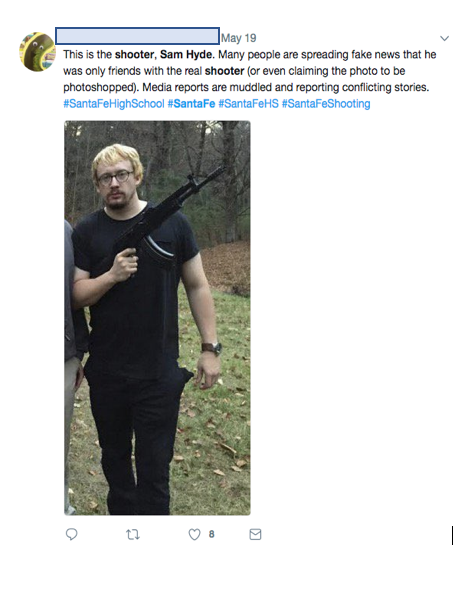 Or you may remember him as an early suspect in the February 14 shooting at Marjory Stoneman Douglas High School in Parkland, Florida: 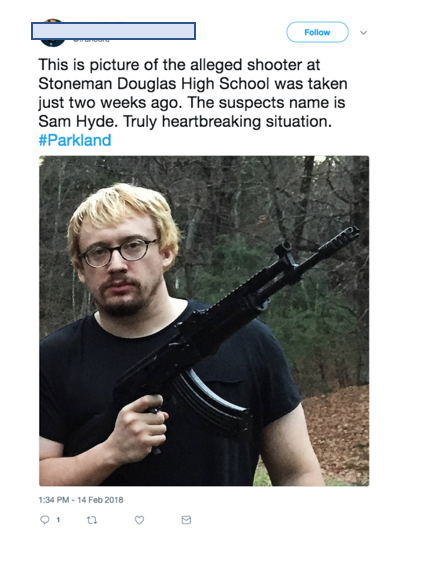 Perhaps you recognize him from a tweet that began circulating after the deadly shooting at YouTube began: 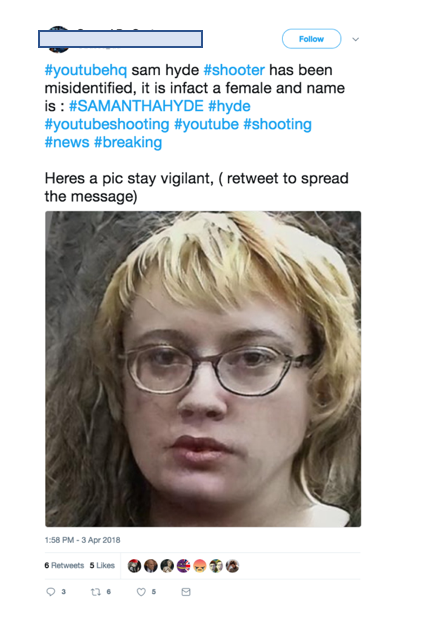 Or maybe a friend retweeted his photo during the Route 91 massacre in Las Vegas, Nevada: 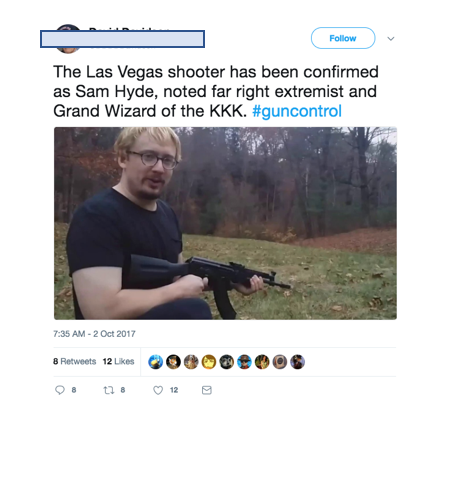 Sam Hyde is a sketch comedian and the star of Million Dollar Extreme Presents: World Peace, a former hit show on Cartoon Network’s Adult Swim comedy line-up. Although Hyde swears 4chan users are responsible for implicating him in every major shooting since 2015, he is closely aligned with the alt-right and has played along with the hoax in recent years by retweeting and reposting doctored photos of himself holding a gun outside mass casualty events. Regardless of where the hoax originated, however, Sam Hyde’s name and image have become an avatar for alt-right supporters seeking to disrupt media and law enforcement efforts during active shooter situations.

Although it is difficult to pinpoint exactly when and where the first conspiratorial tweet was posted, the San Bernardino terrorist attack is generally considered the first instance of the hoax. As the deadly situation unfolded, social media and forum users began posting comments implicating Hyde in the attack. Since then, similar claims have popped up in response to nearly every publicized mass casualty attack in the United States and Western Europe. Once people realized that the tweets were part of a hoax perpetrated by far-right internet trolls, some 4chan users got creative and began sending out doctored or stolen images of alleged attackers claiming to be Bernie Sanders, Hillary Clinton, or Antifa supporters, while others posted tweets tying fake attackers to far-right and white supremacist movements in an attempt to unnerve the “liberal media,” who would inevitably have to retract the stories in which the tweets were featured.

Law enforcement and first responders are understandably immersed in the tactical, life-saving operations of stopping the perpetrator and rescuing hostages as soon as an attack begins. Although social media monitoring is useful in discovering an attacker’s location, police are trained to identify and intercept suspects in real-time and are less likely to misidentify an attacker based on an online disinformation campaign. The media, government representatives, and corporate intelligence teams, however, rely more heavily on social media to track a crisis situation and can be drawn into a feedback loop of false reporting if the disinformation has gone viral.

For example, Representative Vicente Gonzalez identified Sam Hyde as the Southerland Springs church attacker during a live interview with CNN after receiving false information from a producer moments before going on air. Although Gonzalez attempted to correct the mistake soon after the interview, alt-right supporters and 4chan members seized on the story and immediately began circulating the clip online in order to increase its visibility and further complicate emergency response efforts. Hyde’s image and name went viral once again, and Gonzalez and his team were embarrassed for having spread false information while law enforcement agencies were scrambling to find the attacker.

How can one prevent disinformation from driving security responses?

Due to the widespread use of social media, mass casualty events are often reported by victims within seconds of the first shot being fired, but the panicked and chaotic nature of these crises makes it difficult for corporate security teams to distinguish an attacker’s identity or motives until the event has concluded and an investigation has begun. In order to avoid providing false information, security teams should therefore refrain from disseminating information about the attacker’s identity until confirming its authenticity with law enforcement officers involved in the investigation. That’s not to say that information should not be collected, however.

Indeed, the collection of factual information during an emergency is vital for corporate security teams responsible for the safety and security of their workforce, which is why emergency action plans are so important. In order to ensure the accuracy of information provided to employees during a crisis, security teams should follow established guidelines for verifying intelligence, such as establishing the credibility of sources and staying abreast of hoaxes and conspiracies that are frequently floated by nefarious actors during crisis situations. This can be done by regularly monitoring reddit and 4chan threads dedicated to alt-right conspiracies and researching memes and trends that have appeared during crises in the past.

For example, many alt-right social media users’ names, photos, and timelines will feature some version of the movement’s branding or symbolism. Images of Pepe the Frog and discussion of “Kekistan” are strong indicators that the information you’re looking at is unreliable and should not be used to inform crisis response decisions. (The SPLC is a particularly useful resource for tracking the alt-right and has published a helpful guide to identifying the movement’s icons and symbols online.) Including this information in your team’s emergency action plan and conducting regular roundtable exercises will help prepare your team to act quickly and effectively in the event of a crisis. And if all else fails, make sure to at least post Hyde’s picture in your security team’s break room, because if the past few years have taught us anything, it’s that simply knowing who Sam Hyde is is half the battle.